We made it…can you believe it?

Leave a Comment
One year after Chase and Peyton were diagnosed and I can tell you that I honestly never thought I would survive. I never thought my sanity would survive (that’s still up for discussion), I never thought I could do everything that I knew I had to do. I knew what needed to be done and I simply had absolutely no desire to do it. I honestly can remember the realization like it was yesterday, “I am a mom of three children with Autism.” Those words literally cut me like a knife and it was a reality that I was so
Read More

Leave a Comment
There have been so many times in life that I have wondered why things have happened the way they do. Sickness strikes out of nowhere and flips your entire world upside down. Once you start to recover from that and all that entails, something new happens and it just seems like the cycle never ends. Especially in our lives where we have 3 boys diagnosed with Autism. Initially this was a shock and we were overwhelmed on how we could accommodate the needs of three uniquely different individuals. Once the new wore off, an action plan was created and life
Read More

There’s a blessing in the storm.

Leave a Comment
I had started to make a Facebook Post of an update on the boys. But like usual it got too long, what else is new? I’ve never been good at keeping anything short and sweet. But as I was writing this it made me think about so many different things that have been on my mind. The thoughts just kept overflowing and I thought that I better make a Blog Post. Today has been the laziest day that I have had in months. I honestly don’t know the last time I sat around in my pajamas and binge watched Live
Read More

Leave a Comment
I have been contemplating posting an update from our Parent Teacher conferences with Brody’s teacher this past week. I have been constantly going back and forth in my mind on how to do so without being “that Mom”. But we share the journey of our family with the world that consists of the good, the bad and the ugly. We celebrate the smallest victories and most difficult times. We do this in hopes to educate others about Autism and also to spread a sense of understanding to those walking this path who feel alone. Brody’s been in Kindergarten for 2
Read More

Today I had a good cry…

Leave a Comment
It finally happened. When I least expected. I had one of those good long much needed crying sessions. I have been waiting for it since the whirlwind of news has been given to us. The twins autism diagnosis, P’s lung condition, the Seizure scare, waiting to see if the boys are eligible for case management from the department of mental health and figuring out how to add more therapies to our schedule. P is gonna start 18 hours of ABA therapy, 1 hour of OT and an hour of OT/PT combined. Along with trying to fit in additional speech. 21
Read More 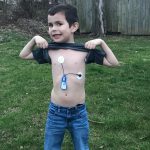