Until all the pieces fit;

Leave a Comment
Today was an extremely hectic day at our house. Brody started Kindergarten Jumpstart at South Park. He was excited but nervous as this is a new unfamiliar chapter, as it is for every new little boy and girl who enters their new BIG school. I was excited and nervous for him as well, but more or so torn because today more than ever, I wanted and needed to be two places at once. Today was the day my precious twin boys were evaluated for Autism at the Thompson Center. As I left the house this morning, my nerves were shot,
Read More

3 Comments
One year ago Brett and I sat in a small room at the Thompson Center and got Brody’s Autism Diagnosis. A year later here we are with lots growth, lots of therapy and the realization that my baby will be starting Kindergarten this Fall. When they tell you it goes fast, it’s not cliche, it really does go fast. In the past year, Brody has grown by leaps and bounds. Brody is doing wonderful and thriving extremely well. He still has some things we’re working on, but who doesn’t? Brody will be undergoing a sedated EEG, MRI and blood testing
Read More

The heartache of a meltdown…

Leave a Comment
It’s been 6+ months since my son’s Autism diagnosis. I can honestly say that most days it never even surfaces in my brain. Most days I don’t even think about it. And some days, I even question it by looking at all the progress he’s made in such a little time. From eating, transitioning, talking and just general love for everything around him. He’s a happy kid and truly has a love for people that runs deep. These are the days I question the diagnosis and the place it has in Brody’s life.  And then….out of nowhere…a meltdown comes and
Read More

1 Comment
One year ago today, my son Peyton was discharged from the hospital after a month long battle with a virus. I’m not sure that many know how bad it was during those 4 weeks in the hospital and it’s not something most people like to talk about a lot. As bad as it was, we have managed to go through this first year with lots of bumps along the way. 2015 definitely takes the cake on the hardest year of our entire life. I know that we have been pretty much an open book about Chase and Peyton as we
Read More

Leave a Comment
Wow! Where has the time gone? I can’t believe it’s almost May and I’m sitting here watching our “miracle Peyton” swing inside our hospital room that overlooks downtown KC. He truly is a miracle and I will continue to say that to remind myself how lucky I am that I still have him here. He has had a rough start to this world and for that I’m sad. The silver lining in this situation is that he will never remember any of this. The failed attempts at a lumbar punctures, the needles, the withdrawals he went through with coming off
Read More 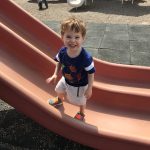 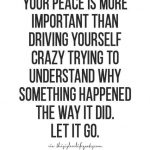