Leave a Comment
Life has a funny way of catching you off guard when you least expect it. This saying is so cliche and to be completely honest cliche sayings annoy me. I think they are cheesy and unoriginal and I am generally someone that can formulate my feelings into words fairly well. Typically when I am going through something, I go to my computer and just write. I express it best through words and there is something so ridiculously theraputic about this process for me. Last week was mentally and emotionally challenging to put it lightly. And the words, well, they just
Read More

Today was a hard day…

Leave a Comment
Every so often in life, you meet someone that changes you. Someone that comes along when you least expect it, enters in an untraditional way and makes you realize how much better your life is because of their presence alone. You think back about how lonely you were before this person, how you didn’t even know that you needed a friend like this and you just thank God repeatedly for placing them along your journey. It’s an effortless friendship that is so natural that it almost seems too good to be true. Let me introduce you to my best friend,
Read More

What you don’t hear…that you should.

Leave a Comment
I find myself so many times scrolling through facebook and emails reading through the rawest and real stories of how hard it is to parent a child with special needs. The isolation, the public outings and stares their child receives while having a meltdown, the family members that give unsolicited advice, the strain on a relationship and just all the stressors that come from navigating through this world of unknowns. And while those blogs are extremely powerful, helpful, insightful and give so many parents a sense of belonging, they often times bring me down and make me sad rather than
Read More

Leave a Comment
Yesterday was another rough day in terms of mental and physical exhaustion for our family. To those of you who have followed our story, you know that we have 3 boys diagnosed with Autism. Through their diagnosis we found through genetic testing that the boys have a rare and serious heart condition called Long QT Syndrome. So with that being said, it’s been a long and exhausting road to figure out how to manage this condition and all the scary realities that accompany this. Yesterday’s appointment was long and for the twins, pretty miserable for anyone who tried to do
Read More

Leave a Comment
This weekend Brett and I went to hang out with friends for a kid free, stress free day. We were both looking forward to it and excited to spend time with some of our favorite people we don’t get to see very often. A couple weeks after school got out in May, I had a couple of bad days that turned into weeks and when I finally realized the funk I was in, it was too far gone. You see thats what anxiety does, you get a handle on things and because life is the way it is, unexpected things
Read More 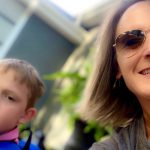